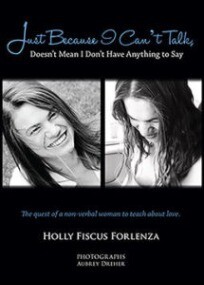 Just Because I Can't Talk, Doesn't Mean I Don't Have Anything to Say

Holly Fiscus Forlenza has never spoken a word in her life. The only verbal sound Holly can make is laughter. At the age of two Holly was diagnoses with profound mental retardation, epilepsy, and failure to thrive, Holly still requires 24/7 care. When Holly was 22 an alternative method of communication known as facilitated communication changed her life! Holly, her Mom, Eileen, and best friend Ashley, worked in conjunction with a facilitated communication specialist to learn that a simple keyboard and a lot of work would provide Holly the voice that had been silenced for 22 years. After a year of hard work and determination Holly was unlocked and expressing her insight and wisdom. Scientists, educators, doctors, therapists are unable to explain this phenomenon! With determination and the help of Eileen and Ashley, Holly typed one finger at a time, “I want a platform to teach about love” which was the inspiration for this book. Through this book, Holly is sharing one of life’s greatest lessons-to love yourself enough to persevere! Holly has also written a song titled “God Will Sing you Home” which was arranged and recorded by the award winning singer/song writer Megan Burtt. Holly continues to express her commitment to empower people to believe in themselves and the everlasting power of love. Holly-luiah!

Save this product for later
Display prices in: USD